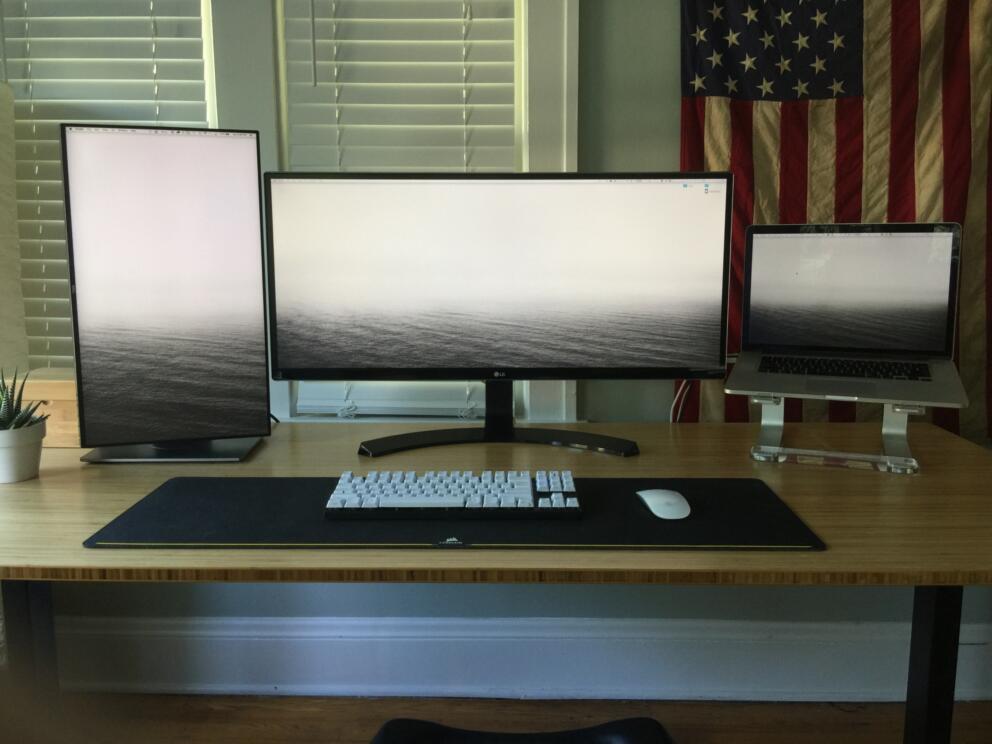 This post is originally from August 2017, but was never completed. In some spring cleaning, I decided to finish it. Here is the state of the 'station of summer last year.

If you're a Battlestation purist, your blood is probably boiling with a laptop being in the picture - this is traditionally referred to as a battletop. But that doesn't translate well to the average person and it sounds .00001% as cool as a battlestation.

Computers and peeking into other peoples workstations has always been entertaining to me, so I thought I'd share mine. Assembling this has taken years to perfect and find what I actually want. Here is a list of things I kept in mind while putting this stuff together.

This is the vertical monitor. I started to pursue the older version of this monitor as a secondary monitor. The monitor that will have relevant things on it to help me with the current task. For example, if I'm working on a new feature for a website, the documentation will typically be on this monitor.

The flat thunderbolt monitor. This main large monitor replaced my old iMac that I used to plug my laptop into. The downside of using an iMac in target display mode is that you need to have a second mac keyboard on your desk to send the iMac into TDM, even though you only have one machine that your using. Clutters things up a lot and never really liked it, but it's what I had so I just rolled with it. Finally sold it and stepped into the ultrawide arena.

This LG ultrawide is a flat model - which makes the most sense to me while making things on. There are a ton of curved ultrawides out there but curving a monitor will cause some kind of distortion towards the edges. Right? I read mixed reviews online, but common sense told me that using a curved monitor for design just sounds like a bad idea for consistency. Finding a flat 3440x1440 monitor with thunderbolt and good color representation was more difficult that I anticipated. Most ultrawides are geared towards gaming it seems and while I'd like to use it for games, I need it to perform the best for working on. I came across this monitor and it had really mixed reviews. Mostly poor reviews from gamers saying it wasn't "immersive" enough (It's not curved 🙄) but designers like it because to the extra screen space vs 27in monitors, accurate colors and flat distortion-less panel. Decided to set an Amazon alert for this model on camelcamelcamel and purchased whenever it went on sale. Absolutely love the monitor and my old regret is not buying it sooner. Awesome monitor.

This is the 15in version with the better graphics card. The faithful work horse that gets used everyday and keeps up well. Love this laptop.

Formerly known as Ergo Depot, the Fully bamboo Jarvis desk is worth it's weight in gold as far as standing desks are concerned. It's easy to setup, easy to use and their warranty makes spending the money on a desk a little easier. When this desk first arrived, the bamboo top had a knick in it from with the warehouse or shipping and they sent me a replacement out in the mail the next day. Absolutely great customer service.

As a guy who spends most of his life at a desk, both at work and in my free time, getting a standing desk is always something I wanted to do - but never had the means to do. With Lola's video on YouTube reaching a few million views, I decided to finally take the plunge and get a standing desk with that sweet, sweet Google money.

There definitely are cheaper models out there, but the other models don't come with as strong of motors that raise and lower the desk and don't have as good of warranties. I've had my last desk for over 10 years, so I don't consider myself a frequent upgrader as far as desks are concerned. Having the longer warranty and more high-quality parts were important for me as I don't want to be messing with this for another 10+ years.

One con to this desk it the cable management aspect. It comes with an available cable management upgrade package that includes two trays and some other helpful cable management clips and ties. The design of the desk is a flat piece of wood, no drawers or things to hide cables easily, everything has to be routed with clips and tied meticulously or cables will be danging around to potentially get caught on something and ruin your day while lowering and raising the desk. This isn't a Jarvis problem, as much as a problem with standing desks as a whole. I have a windowsill that sticks out slightly and while raising my desk my laptop charger was under the windowsill and pulled out of my computer. The smart apple engineers made it magnetic so there was zero damage however the surge of adrenaline that came over me as I saw a cord get caught up and pull out of my computer was very real. The motors are pretty strong and will totally pull something off the desk if you're not careful. Lesson learned: cable management is important with standing desks.

I have a separate article about the Varmilo VB87M. It's still awesome.

It's a designer workhorse. Not ergonomic at all, the batteries frequently loose bluetooth connection, but it navigates different workspace better than any other mouse. It gets the job done. 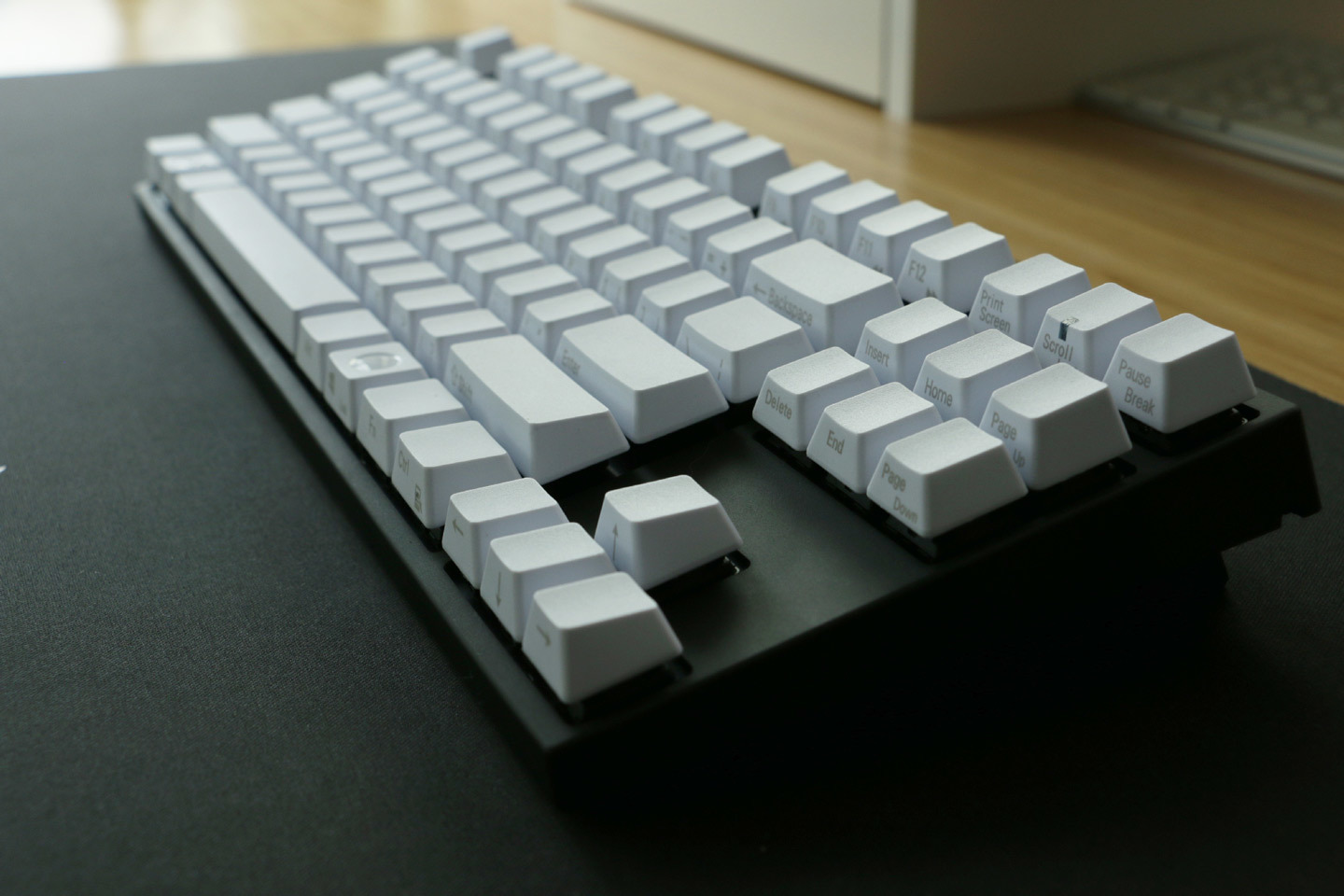